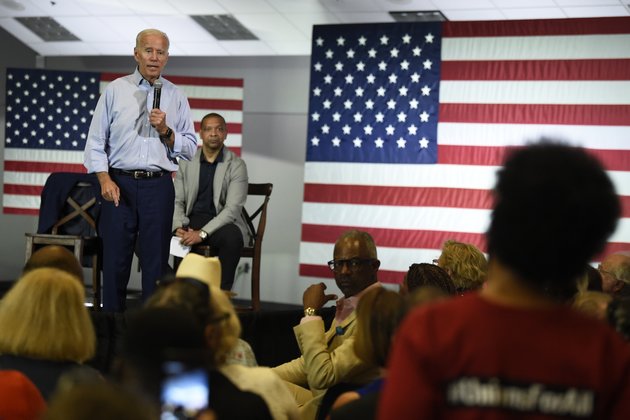 WASHINGTON - The Democratic presidential field continues to shift as one candidate dropped out this week and another joined an already crowded group hoping to oust President Donald Trump from office next year.

At the top of the field, former Vice President Joe Biden remains the leading contender but finds himself fending off increasingly strong challenges from two senators-Kamala Harris of California and Elizabeth Warren of Massachusetts. And 2016 contender Senator Bernie Sanders continues to lurk in the top tier, offering liberal voters one of several candidates to choose from.

The latest to join the Democratic race is billionaire liberal activist Tom Steyer who made his candidacy official in a campaign video.

"If you think that there is something that is absolutely critical, try as hard as you can and let the chips fall where they may. And that is exactly what I am doing."

Steyer had been funding a grass roots effort to build support to impeach President Donald Trump and some months back decided against a presidential run. Now Steyer is in the field but will have to scramble to make the cut for some of the upcoming Democratic debates.

Even as Steyer entered the race, California Congressman Eric Swalwell became the first Democrat to formally drop out of the crowded presidential field.

"Look, it is a talented field, and that was one of the challenges for us," Swalwell told reporters in California this week. "You had a lot of heavyweights in that field and it is going to take more twists and turns and I look forward now to being a citizen watching the debates."

Swalwell took part in the first Democratic debates in late June and tried to capitalize on the moment by taking a shot at frontrunner Joe Biden.

"Joe Biden was right when he said it was time to pass the torch to a new generation of Americans 32 years ago. It is still right today," Swalwell said to a mixed reception from the debate audience in Miami.

Biden smiled through Swalwell's remarks and then offered a cryptic response. "I am still holding onto that torch!"

Biden remains the Democratic frontrunner despite a rocky performance in the first debate.

But the former vice president has seen some slippage in the polls as Senators Kamala Harris of California and Elizabeth Warren of Massachusetts have been climbing.

Overall this latest poll has Biden in the lead at 31 percent, followed by Sanders at 19 percent, Harris at 14 percent and Warren with 13 percent. Rounding out the field are South Bend, Indiana, Mayor Pete Buttigieg with 6 percent, former Texas Representative Beto O'Rourke at 3 percent and New Jersey Senator Cory Booker at 2 percent.

In addition, the Morning Consult survey said that Biden's support among African American voters has dipped by eight percent since the debate, though he still leads overall among black voters with 38 percent support, followed by Sanders at 21 percent and Harris at 16 percent.

The departure of Swalwell from the race is an indication that the lengthy winnowing process for the large Democratic field has begun, according to Jim Kessler of the centrist Democratic group, Third Way.

"I think we are really at the point where there is eight to ten who have some shot (at the nomination). I mean, one of the things these debates did is that you looked at some of the also-rans (lesser candidates) and you thought, they are also-rans and they are going to be forever also-rans and maybe it is just time for you to go."

Democrats do not begin the voting process to choose their 2020 nominee until the Iowa caucuses in February, and analysts warn that leaves plenty of time for the various contenders to go after one another and sow division within the party.

"Will they be willing to rally around the one candidate out of the 20-plus candidates who will actually get the nomination when their candidate loses? And that is a great test for a party in any year and you simply don't know the answer this early," said University of Virginia analyst Larry Sabato. He spoke to VOA via Skype from Charlottesville, Virginia.

The Democrats hold their next debate in Detroit at the end of this month. A third debate has been scheduled for mid-September in Houston.

DUBLIN, Ireland - Apple has been recognised as one of the greatest foreign direct investors in Ireland.The company on Monday ...

BEIJING, China - There are currently eleven nuclear power units under construction in China, the largest number of nuclear power ...

SAN JOSE, California - Apple has added a new toggle that addresses privacy concerns around the location tracking feature on ...

DUBAI, UAE - The 800MW third phase of Dubai's solar park will be operational in April, the Dubai Electricity and ...

WASHINGTON, DC - The Pentagon on Thursday awarded more than half-a-billion dollars in defense contracts.With around 0.53 cents in every ...

US Ag Secretary: No Need for More Farm Aid After China Trade Deal

AUSTIN, TEXAS - With China poised to increase purchases of U.S. agricultural goods this year as part of a Phase ...

Taking a look at the politicisation of antisemitism

LONDON, UK In 2004 Greg Philo and Mike Berry authored Bad News from Israel, a ground-breaking work for the Glasgow ...

The San Francisco 49ers are on their way to Miami to face the Kansas City Chiefs in Super Bowl LIV. ...

Grandson of JFK urges Republicans to break ranks with Trump

WASHINGTON - Key players in the impeachment trial of U.S. President Donald Trump and his defense argued sharply Sunday whether ...

ABUJA, Nigeria - The Indian Mission in Nigeria on Sunday said that 20 seafarers who were kidnapped by pirates last ...