Did bees live in the time of dinosaurs? 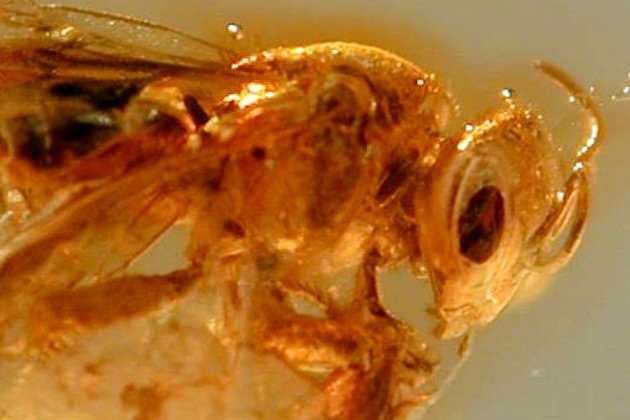 Curious Kids is a series for children of all ages. If you have a question you'd like an expert to answer, send it to CuriousKidsUS@theconversation.com.

Yes, and in fact they shared the planet for millions of years before a mass extinction wiped out dinosaurs, but spared bees and many other living things.

How do we know that bees were around when dinosaurs still roamed the Earth? The main evidence comes from fossils - the mineralized remains of long-dead organisms.

A lot has to go right for a dead creature to become a fossil. It has to be quickly covered by sediment before a scavenger has a chance to eat it - and the sediment has to be just right to preserve the details of its body. Then, millions of years later, that same sediment, now rock, has to become exposed through erosion so that people can find it and study it. When things go right, even a single fossil specimen can reveal a great deal.

Extinct animal species, known only from fossils, often look very different from creatures alive today. But scientists can almost always identify which branch of the tree of life they belong to, and thereby identify how they are related. The dinosaurs - T. rex, Velociraptor, Triceratops and the rest - seem almost fantastically weird, but their fossilized skeletons enable us to recognize them as reptiles.

The same is true for insects. Scientists can identify something as a bee by its distinctive features, such as the structure of its antennae, the shapes of its major body parts, and the pattern of veins in its wings.

Using these features, scientists have identified fossils of dozens of species of extinct bees. Some look like modern bees; others look quite different but are still recognizable as bees.

The oldest fossil bees look a lot like wasps. In fact, bees are thought to be a branch of the wasp family tree that evolved a vegetarian lifestyle, getting food from flowers instead of eating other insects.

The most exquisitely preserved fossil bees have been found in amber, which is fossilized plant sap. Perhaps these bees became trapped in sap while trying to collect it for constructing their nests - something many bees do today.

But how do we know how old any of these fossils are? It turns out the rocks that encase them have a built-in clock that reveals their age. The most common "radiometric clock" relies upon the decay of uranium into lead.

By knowing how much uranium and lead were present when the mineral rock was formed, how much is present now, and how fast this decay happens, we can reliably estimate the age of many ancient rocks, which tells us how long ago fossilized organisms lived.

Did a dinosaur ever get stung chomping into a plant where bees were nesting or collecting nectar and pollen? We can't know for sure, but fossils tell us it is very possible.

Hello, curious kids! Do you have a question you'd like an expert to answer? Ask an adult to send your question to CuriousKidsUS@theconversation.com. Please tell us your name, age and the city where you live.

And since curiosity has no age limit - adults, let us know what you're wondering, too. We won't be able to answer every question, but we will do our best.

[ Insight, in your inbox each day. You can get it with The Conversation's email newsletter. ]