US Economy Adds 4.8M New Jobs as Unemployment Falls to 11.1% 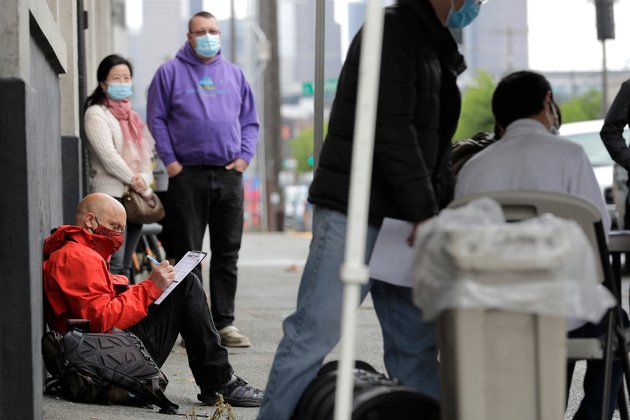 WASHINGTON - The U.S. economy added 4.8 million jobs in June as it struggles to recover from the business closures forced by the coronavirus pandemic, the government reported Thursday, even as it said another 1.4 million laid-off workers filed for unemployment benefits last week.

The Bureau of Labor Statistics said the country's unemployment rate improved to 11.1% in June, compared to the official May figure of 13.3%. But the June figure was compiled at mid-month before a new, record-high surge of confirmed coronavirus infections spread across the U.S. states that were among the first to reopen their economies.

The reports on job growth and unemployment show the U.S. economy, the world's largest, at a crossroad, with pockets of recovery and uncertainty. Some businesses, stores, restaurants, gyms and salons are making attempts to reopen even as the sharp increase in coronavirus infections across the southern tier of the country is forcing some of them to reclose again or delay a further return to normal operations.

In all, 48.4 million workers have sought unemployment compensation during the 3 ½ months the coronavirus infections have been recorded in the U.S. The jobless rate was near a 50-year low of 3.5% before the pandemic landed on U.S. shores.

Millions of the unemployed have returned to work, but those still left without work are facing new financial difficulties, with the national government set at the end of July to end its $600-a-week boost to less generous state unemployment benefits.

The number of U.S. workers claiming unemployment compensation has now declined for 15 straight weeks, but the most recent four-week average was 1.5 million, a stubbornly high figure and one that has stayed relatively steady for a month.

Key U.S. economic officials are predicting that the country's full recovery from the pandemic will take a lengthy period, extending well into 2021.

Federal Reserve Chair Jerome Powell said earlier this week that immediate path ahead for the U.S. economy remains "extraordinarily uncertain." He said the recovery is largely dependent on containing the pandemic, but more than 50,000 new coronavirus cases were recorded in the U.S. on Wednesday.

Powell told a congressional committee the economy may be showing signs of progress, but cautioned, "While this bounce-back in economic activity is welcome, it also presents new challenges - notably, the need to keep the virus in check."

President Donald Trump says he supports another round of $1,200 stimulus payments to most taxpayers, even as some of his fellow Republicans have voiced concerns about the country's ever-increasing national debt that now totals more than $26 trillion.

No legislative decisions are likely before late July as the White House and Congress assess the economic uncertainty and the concurrent spread of the virus.

House Democrats have approved about $3 trillion in new spending, which would provide more aid for states and cities, among other things. But Senate Republicans and the White House have rejected the plan and are considering other options to boost the economy.

Even the official unemployment rate is in question as federal record-keepers struggle to classify workers as possibly nominally working from home. The official U.S. jobless rate was 13.3% in May, although officials say that when a survey error was accounted for, the rate should have totaled 16.4%.

The Fed has predicted that U.S. unemployment will fall to 9.3% by the end of this year and to 6.5% by the end of 2021, a rosier advance than some economists are forecasting.

The U.S. death toll from the virus has now topped 128,000, by far the most in the world, and health experts predict tens of thousands more will die in the coming months.