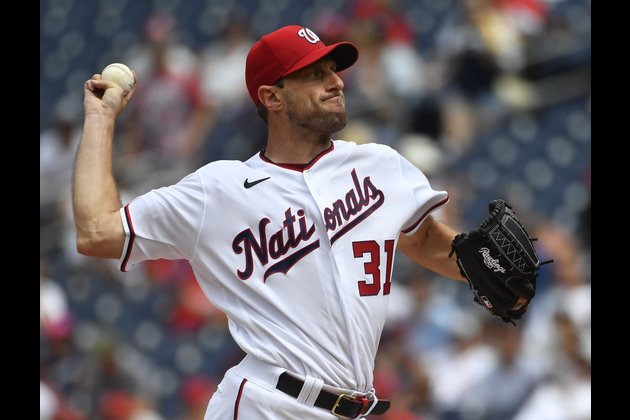 Right-hander Max Scherzer will make his 189th regular season start for the Washington Nationals when they visit the Baltimore Orioles on Saturday.

There is a chance it could be his last.

Following Friday night's 6-1 loss to the Orioles, the Nationals are seven games behind the first-place Metsin the National League East -- and 11 games out of the wild card -- with six games remaining before the July 30 trade deadline.

Scherzer, completing a seven-year contract, can veto a trade as a 10-year veteran who has spent at least five seasons with his current team. His agent recently told NBC Sports Chicago that the ace will do so unless he receives a contract extension. Washington general manager Mike Rizzo likely won't decide whether Washington is a buyer or seller until a few days before the deadline.

"I mean, I think if we turn into definite sellers, everything will be on the table, I would think," Rizzo said earlier this week, before adding: "Which I don't foresee."

Meanwhile, Scherzer has not been part of the problem for Washington. He's 7-4 with a 2.83 ERA this season and has gone 91-47 with a 2.80 ERA, two no-hitters, 1,605 strikeouts, two Cy Young Awards and a World Series title with the Nationals.

He also won a Cy Young Award with the Detroit Tigers.

Last time out, Scherzer -- who hasn't taken a loss since May 30 -- allowed four runs in seven innings of a July 18 game the Nationals eventually won against San Diego 8-7. He walked three and struck out eight.

He will face a familiar foe, former New York Mets right-hander Matt Harvey (4-10, 7.13), on Saturday. Harvey and Scherzer faced off several times before Harvey left the Mets, including on Oct. 3, 2015, when Scherzer no-hit the Mets and Harvey, 2-0.

Harvey struggled mightily between early May and early July as his record went from 3-1 with a 4.06 ERA to 3-10 and 7.70 ERA. In his first start after the All-Star break, he tossed six shutout innings in a win over the Kansas City Royals last Sunday.

"I put in my mind that I was starting over. Really trying to go out there and flip the switch on such a poor first half," Harvey said. "Having those four days off to just recharge and see the family, and spend some really quality time with loved ones, it definitely helps. Definitely gets your mind back into a better place where it's easy to flip the switch."

Pat Valaika hit two solo homers in the Orioles' Friday night win. Valaika, who began the night hitting .188, has three homers in his past two games.

"I think tonight I just squared up those balls better than I have pretty much this whole year," he said. "It felt good to actually drive the ball and not see it die on the track, so hopefully I can continue that and keep it rolling."

The Nationals went 0-for-8 with runners in scoring position and fell to 2-2 in a crucial six-game stretch against the last-place teams in the NL East (Miami Marlins) and American League East (Orioles).

"We didn't hit. Our first three batters, I think, left (seven) guys on base," said Nationals manager Dave Martinez said. "So just got to come back tomorrow and win tomorrow and try to win the series. We've said all along, if we come out and start winning series, we'll get back in this thing."