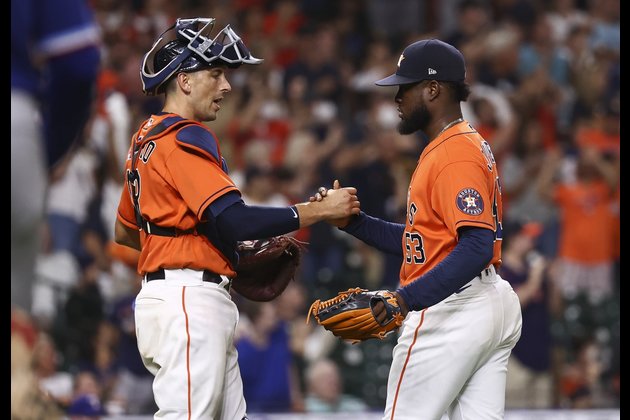 As the Houston Astros inch toward optimal health, they remain in a holding pattern for shortstop Carlos Correa to return to his All-Star form.

Correa finished 0-for-4 with an RBI and two strikeouts in the Astros' 7-3 win over the visiting Texas Rangers on Friday. Correa has just two hits with 17strikeouts over his last 11 games, and his average has plummeted 28 points since July 3, a stretch that includes having been sidelined with a non-COVID illness.

Houston improved to 7-4 with Correa slumping.

"He's pretty close," Astros manager Dusty Baker said. "He's hit some balls on the nose. That's the first sign that your strength is back and your timing is back. He's right around the corner."

Left-hander Framber Valdez (5-2, 3.26 ERA) is the scheduled starter for the Astros on Saturday night against the Rangers, who have lost 10 in a row. Valdez allowed four runs on seven hits and two walks with four strikeouts over 6 1/3 innings in his previous start, a 4-0 setback at the Chicago White Sox on Sunday.

After allowing three runs or less in each of his first seven starts following his return from the injured list, Valdez is 0-1 with a 6.46 ERA over his previous three starts and has surrendered a .343/.443/.537 slash line. This will mark his first outing of the season against the Rangers, against whom Valdez is 1-2 with a 5.12 ERA over six career appearances (three starts).

Right-hander Kyle Gibson (6-2, 2.86) will start for Texas. He is 0-2 with a 10.32 ERA in two starts since the All-Star break, with both appearances coming against the Detroit Tigers. Before the back-to-back losses, Gibson was 6-0 with a 1.51 ERA over 15 starts dating to April 7, allowing three runs or less in each appearance.

He is 4-2 with a 2.41 ERA in 12 career starts against the Astros and has recorded a quality start in all three appearances against Houston this season. However, he has yet to record a decision against the Astros in 2021 despite pitching to a 1.89 ERA in 19 innings.

Poor body language was a talking point following the Rangers' 7-5 loss in Detroit on Thursday after Texas right-hander Mike Foltynewicz allowed three home runs over four innings. The dialogue continued in earnest following the series-opening loss against the Astros as the Rangers have their longest losing streak since July 17-26, 1995.

Texas lost nine consecutive games earlier this season, and this marks the first time in club history that the Rangers have endured two losing streaks of at least nine games in the same season. The lack of success has started to manifest into visible displays of frustration on the field, much to the chagrin of Texas manager Chris Woodward.

"It does because we address it a lot with the entire group," Woodward said when asked if the poor body language bothers him. "You've got to hold your heads high. Down 7-0 you've got to keep your heads high more so. We've got to remain competitive. We can't feel sorry for ourselves.

"This is Baseball 101. It's something you learn when you're 11. You have to get over it. We're in a tough stretch right now, I get it. We're trying to build toughness. We've got to do a better job of that."