Royals come from behind, hang on against Tigers 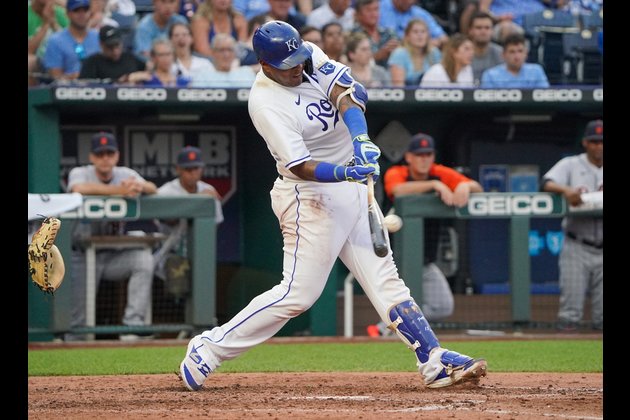 Nicky Lopez had three hits and scored two runs in the No. 9 spot for the Royals, who have won four in a row.

Tyler Zuber, Domingo Tapia, Jake Brentz (3-2) and Josh Staumont each threw shutout innings in relief. Greg Holland struggled in the ninth before Wade Davis got the final out with two aboard for his second save.

Jeimer Candelario hit a three-run homer and Akil Baddoo had a two-run shot for the Tigers, who have dropped two straight after winning the first seven coming out of the All-Star break.

Detroit starter Casey Mize brought a 6-0 lead into the fifth inning, but was unable to complete it.

Mize, the first overall pick in the 2018 MLB draft, allowed four runs and six hits in 4 2/3 innings, striking out six and walking one on 79 pitches.

Perez hit a three-run homer to highlight a four-run fifth inning that cut the deficit to 6-4 and knocked Mize from the game.

Santana went deep with two aboard in the seventh off Kyle Funkhouser (4-1) to put the Royals ahead 7-6.

Hanser Alberto pinch-hit later in the seventh and drove in two more runs with a triple to make it 9-6.

Baddoo went deep in the ninth to trim the lead to 9-8.

The Tigers put their first two runners on base in the second, third and fifth innings and capitalized each time to build the 6-0 lead.

The Tigers took a 1-0 lead in the second when Miguel Cabrera scored from second on an error by Hernandez.

Hernandez walked the bases loaded in the third and Cabrera hit a sacrifice fly to right to make it 2-0. Candelario followed with his three-run homer to center to stretch the lead to 5-0.

Cabrera delivered another sacrifice fly in the fifth to make it 6-0.