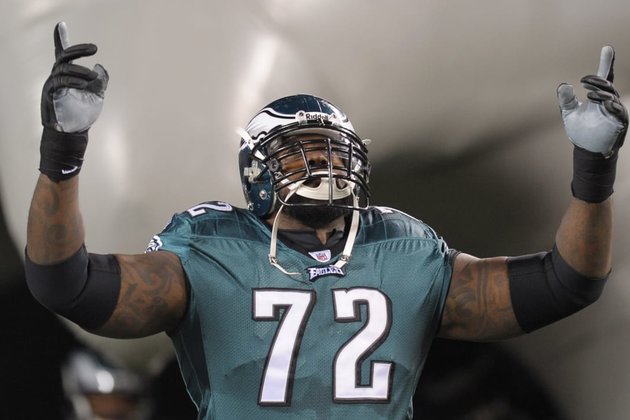 Tra Thomas: The Technician The former first-round pick set a high standard for all future left tackles to follow. He will enter the Eagles Hall of Fame on Thursday alongside Jon Runyan. By Chris McPherson

Tra Thomas vividly recalls meeting Eagles Offensive Line Coach Juan Castillo at Veterans Stadium for a pre-draft visit in 1998. As soon as Thomas arrived, Castillo took him out onto the turf field. Mind you, it was nighttime. There were no lights on in the stadium. Thomas was still in his clothes from the flight, the suitcase nearby. Castillo immediately started working with Thomas, the Florida State product, on vertical pass sets.

Some players might have been scared off, wondering what they were getting themselves into. Not Thomas.

Even though Thomas was a highly touted draft prospect, telling the other teams around the league that you're not interested in meeting was a bit of a gamble. It paid off for both Thomas and the Eagles. The Eagles chose a generational blindside protector in Thomas with the 11th overall pick in that draft. Thomas wasted no time cultivating a relationship with the City of Philadelphia. He drove from Florida State's campus in Tallahassee to Philadelphia and immediately bought a house in the area to get settled prior to the team's first minicamp.

Good thing. He was the opening-day starter at left tackle for the Eagles as a rookie.

Thomas battled through a 3-13 season with Ray Rhodes as the head coach. The Eagles brought in a whole new coaching staff led by young Andy Reid the following year. But one of the few holdovers from the previous group was Castillo. Philadelphia endured growing pains in 1999 during Reid's first year, but the tide turned starting in 2000. The Eagles reached the playoffs in each of the next five seasons. They won four straight division titles from 2001-04, no NFC East team has accomplished a repeat since, and reached the NFC Championship Game each time, landing in the Super Bowl after the 2004 season.

As Thomas learned over the years, there is no better sports city than Philadelphia.

"You felt the energy and the passion from the fans, especially when we started turning things around and started winning," said Thomas, a native of DeLand, Florida. "That was one of the things you really fed off of to the point where once I left Philadelphia the game just wasn't the same for me. I was ready to just shut it down because I didn't have that same energy, that same attachment that I had here in Philly."

The offensive line was a critical part of the Eagles' successful run, reaching another NFC Championship Game in 2008. Along the way, Thomas was continually honored as one of the elite left tackles in the NFL, earning three Pro Bowl nominations, tied for second most by any offensive lineman in franchise history.

Thomas will be celebrated along with his tackle partner Jon Runyan on Thursday night when the two are inducted into the Philadelphia Eagles Hall of Fame.

When Chairman and CEO Jeffrey Lurie wanted to set up a call with Thomas last summer, the former lineman knew something was up. He raced home so that his family could be on the phone when Lurie delivered the news. He then reached out to the man who helped mold his 6-foot-7, 350-pound frame into a graceful pass protector.

"I told him that he's one of the reasons I'm here. He taught me how to really approach this game," Thomas said. "I learned as much as what Juan could give me, just from the time I took my first trip here."

The selection of Thomas in that 1998 NFL Draft was a critical moment in the history of the franchise. For several years, the Eagles tried to solve the left tackle puzzle and it wasn't until Thomas' arrival as the foundational piece that allowed the team to build the rest of the unit.

The Eagles didn't have to worry about the left tackle position for over a decade, as Thomas played in 166 regular-season games from 1998-2008, the sixth most of any player in franchise history and second most by an offensive lineman behind Pro Football Hall of Famer Chuck Bednarik. Thomas and Runyan teamed up for 17 postseason clashes, only David Akers and Brian Dawkins suited up in more as an Eagle.

Thomas is still heavily involved with the game of football. He was an assistant coach with the Eagles for two years and is now the offensive line coach at IMG Academy in Bradenton, Florida, where his son, Jake, is - surprise - a left tackle.

"I like coaching. I learned a lot throughout my career and I like going back and trying to show some of that, especially with the offensive line technique that's out there right now," Thomas said. "I love being able to leave my fingerprint on the game."

Read this feature and more in the latest issue of Gameday Magazine.