Weekly wrap-up: Getting ready for Week 6 vs. Giants after a mini bye 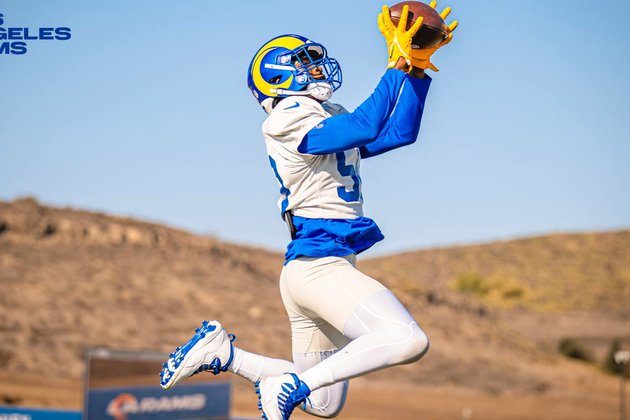 After a win against the Seattle Seahawks on Thursday Night Football, the Los Angeles Rams got to enjoy a mini bye week before they face the New York Giants for Week 6 at MetLife Stadium. Here is a recap of the storylines of the week.

The Los Angeles Rams are back from a mini bye week and they are rested, ready & determined to face the New York Giants in Sunday's Week 6 matchup at MetLife Stadium.

Watch highlights from the Los Angeles Rams' Week 6 practices as they get ready to take on the New York Giants at MetLife Stadium on Sunday.

Watch and listen to Los Angeles Rams WR Robert Woods mic'd up for Rams vs. Seattle Seahawks at Lumen Field.

Sounds of the Game

Relive the Los Angeles Rams thrilling fourth quarter with the sights & sounds from their Week 5 matchup against the Seattle Seahawks at Lumen Field.

On the latest edition of Rams Revealed, J.B. Long is joined by Los Angeles Rams DL Michael Hoecht as they discuss his journey from the Ivy League to the NFL, how hard work and determination propelled him to 53-man roster this season, and why the work ethic of Aaron Donald is so inspiring to him.

Go into the weight room with Los Angeles Rams Director of Strength and Conditioning Justin Lovett as he uses Theragun technology to keep players performing at the highest level.

Question of the day

Los Angeles Rams players answer the question of the day at practice: If you could play for another LA sports team, which would it be?

On this edition of Between the Horns, J.B. Long & D'Marco Farr are joined by NFL Network reporter Steve Wyche as they discuss the Rams' big win on TNF over the Seattle Seahawks. Also, the offense continues to roll as the team prepares to take on the New York Giants and sure up the defense after the loss of Darious Williams.

Muralist Gustavo Zermeno Jr. joins comedian Jay Mendoza to visit significant places around Venice, CA to talk about the murals he has painted for the Los Angeles Rams, Dodgers & Lakers.

D'Marco Farr is joined by his former teammate and Super Bowl winning QB Kurt Warner as they discuss his unlikely road to the NFL, being a part of the 'Greatest Show on Turf', and his Hall of Fame career.