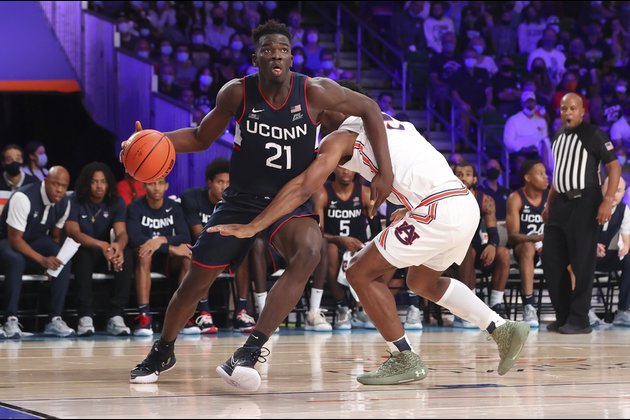 No. 22 UConn and Michigan State have little time to recuperate from their thrilling Wednesday victories. They will turn their attention to a Thanksgiving meeting in one semifinal of the Battle 4 Atlantis in Paradise Island, Bahamas.

Come opening tip Thursday at noon ET, UConn (5-0) will be fewerthan 20 hours removed from finishing off a 115-109, double-overtime triumph over No. 19 Auburn. The Huskies fought back from Auburn's K.D. Johnson making game-tying baskets at the end of both regulation and the first OT.

"Right now, it's exhausting," UConn coach Dan Hurley said. "While it's happening, it's pretty chaotic. Now, with a chance to sit back with a chance to think about how many different ways it could have went the other way, through regulation, really the five-minute mark all the way through to the second overtime, just a multitude of things that went on -- mind-boggling, mind-numbing."

The Huskies shot 49.3 percent from the field and 57.7 percent from 3-point range to keep Auburn on its heels. Adama Sanogo went for 30 points in 37 minutes to lead all scorers.

It was the biggest win of the young season for Hurley's program, which last knocked off a ranked opponent in March 2020.

"We've been working to get to this point for years now, to get the UConn brand back to what it was in the past," Tyler Polley said after coming off the bench to drop 24 points. "A game like this helps."

At the end of the game, UConn's Isaiah Whaley fainted near the Huskies' bench, but the program released a statement saying he was doing OK after the episode.

In the tournament's first game of the day, Michigan State (4-1) beat Loyola Chicago 63-61 on an alley-oop dunk by Marcus Bingham Jr. with less than four seconds to play. Tyson Walker dribbled down the clock after an inbounds pass and came off a pick-and-roll toward the basket, where Bingham had broken free.

"It was a great play by Tyson, and Marky went up and got it like a man," Spartans coach Tom Izzo said.

Izzo was less pleased about his team's 20 turnovers.

"Hey, Thanksgiving -- we're givers. We just gave it to them," Izzo said. "I mean, they did a good job, too, don't get me wrong. But we gave them many of those turnovers, and some of them were for touchdowns as I say."

The Spartans will be hopeful for another dominant performance by Malik Hall, who shot a perfect 9-for-9 and drilled a key 3-pointer late in the game on his way to a career-best 24 points and seven rebounds.

"(Izzo) has been harping on energy a lot for me, so I think the past week or so since before we left, I just tried to bring as much energy as possible in practice, on the plane, wherever we're at," Hall said. "And I think (it) paid off listening to him. Probably should do it more."