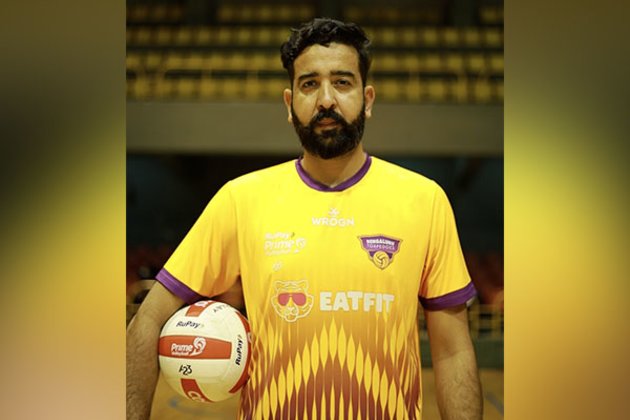 Bengaluru (Karnataka) [India], January 25 (ANI): Bengaluru Torpedoes on Tuesday announced volleyball star Ranjit Singh as their captain to lead the side for the 2022 edition of Prime Volleyball League.

Speaking on his new role, Ranjit said that he is grateful to the franchise owners and the coaching staff for having faith in him, and added that he is looking forward to leading the team which has a fine mix of experienced stars and youngsters.

"It will be a matter of great pride for me to lead the Bengaluru Torpedoes in the Prime Volleyball League this year. I am thankful to everyone, the support staff, the coaches, and the owners for giving me an opportunity, for continuously backing me, and allowing me to portray the best version of myself," he said in a statement.

"We have a good mix of players in the team and we have bonded well over the past couple of weeks during our camp in Mysore. I look forward to giving my best to the team and hopefully, we will have a memorable season ahead," Ranjit added.

Bengaluru Torpedoes' Principal Owner, Ankit Nagori also congratulated Ranjit for the role and explained why he was the right person for the role. "Ranjit was the obvious choice for the role and we are very lucky to have him in our squad," Ankit said.

"He has vast experience of captaining India and playing for the National team in major international tournaments. He brings his immense knowledge of the sport, and his pulsating energy to the team in every training session and the youngsters really enjoy his presence and are learning so much from him," he added.

Ranjit Singh, who plays as a setter, was bought at Rs 4.4 lakhs by the Bengaluru Torpedoes at the Auctions in December. Ranjit, who hails from, Tarn Taran district in Punjab, has already made over 50 appearances for the Senior Indian Team in his career. His international career started with the Youth Indian Team when he was 17 years old.

WASHINGTON D.C.: In a tweet this week, Amazon founder Jeff Bezos criticized President Joe Biden for the second time in ...