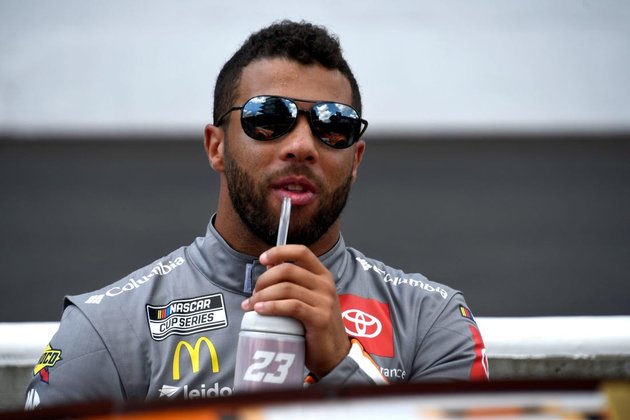 After turning a blistering lap on Saturday at Michigan International Speedway, Bubba Wallace had no idea he had won the pole for Sunday's Firekeepers Casino 400 (3 p.m. ET on USA, MRN and SiriusXM NASCAR Radio).

Moments after completing his final-round lap in 37.755 seconds (190.703 mph), Wallacecontinued through Turns 1 and 2 to dead silence on his team radio.

The Busch Light Pole Award was the first of Wallace's career and the first for 23XI Racing as an organization.

"About time," Wallace said. "It took me five years to get my first pole. It's a testament to 23XI, everybody on the No. 23 team. They've been doing a tremendous job all year long, really. Just haven't had the finishes we deserve, but proud for everybody just sticking through it.

"A lot of adversity on this team, and we keep showing up ready to battle."

That could be significant, given that five of the last six Michigan races have been won from starting positions of third or better. The exception was the second race of 2020, when the top 20 finishers from the previous day were inverted to start the second leg of a weekend doubleheader.

Kevin Harvick swept those two races from positions three and 20 on the grid.

The satirical comic strip "L'il Abner" featured a character named Joe Btfsplk, who was drawn with a perpetual rain cloud over his head.

Given his recent performance on track and the frightening experience his family endured Thursday at the Mall of America, Kyle Busch seems to feel a certain kinship to the hard-luck character.

Busch, wife Samantha, son Brexton and baby daughter Lennix were visiting the Mall of America when word of an active shooter cascaded through the crowded facility. Samantha and Lennix were separated from Kyle and Brexton, who were waiting in line for a ride.

"There was definitely a sense of danger, a huge sense," Busch said. "Samantha called me-we had no idea. Brexton and I were in line for a ride; we were next to go on that ride. And Samantha called me, and I answered, and we skipped right through going on the ride and went right back out the exit.

"And then we just stayed on the phone together because she told me, 'There's an active shooter and shots have been fired in the mall.' And at that point, active shooter or somebody shooting at another person, whatever shots being fired, you don't know.

"So that's the scariest part is you have no idea what is happening, so I'm asking her, 'Where are you? What store is it coming from? What level are you on?' All those sorts of things to figure out. Am I walking my way right into it? Or am I walking my way out of it? And so there's chaos."

Fortunately, Busch and his family got out of the mall unharmed, but to the driver of the No. 18 Joe Gibbs Racing Toyota, the experience was emblematic of the last two months. Frustrated in his contract negotiations for 2023 and beyond, Busch comes to Michigan on a career-worst streak of seven races without a top 10.

"I guess if you look at that dark cloud that's over me lately-hence the other day-we're in the wrong place at the wrong time a lot of times," Busch said ruefully.

His run of bad luck included a disqualification after running second at Pocono, where post-race inspection revealed tape added to the nose of his Camry and that of ostensible race winner Denny Hamlin, who also was disqualified.

Bragging rights are an important aspect of racing near the home of the American auto industry, where Ford drivers have had the upper hand for the last four years.

After Kyle Larson swept the 2017 season in a Chevrolet, Fords have won the last seven races at Michigan International Speedway, with Kevin Harvick contributing four victories during that span.

But with NASCAR's switch to the Next Gen race car this season, 2019 race winner Joey Logano isn't certain that Ford's domination can continue this weekend.

"We'll see," Logano said. "It seems like short tracks have been a little bit more of our wheelhouse these days with the Next Gen car... I know the reasons, but hopefully this race track falls into our wheelhouse from an engine perspective. It seems like a lot of times that's why we've seen so much success here is the Roush Yates power, especially on the top end, has been pretty good...

With eye on competition, Tata Motors selling $10,000 EV in India

NEW DELHI, India: As it seeks to attract more buyers, Tata Motors, the country's only electric vehicle maker, has introduced ...

TEL AVIV, Israel - The Israeli army has approved using drones to carry out assassinations in the West Bank.The extraordinary ...