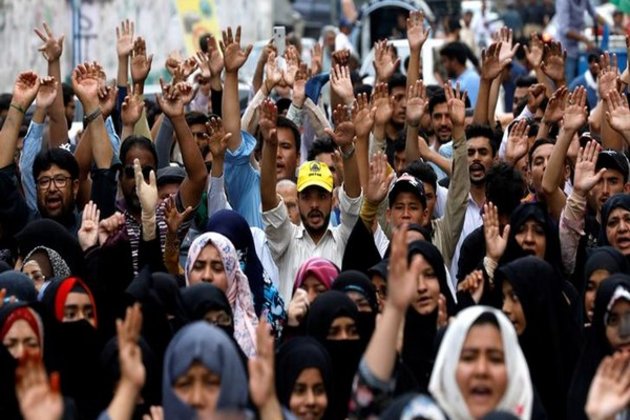 Kabul [Afghanistan], October 2 (ANI): Following a deadly explosion at an education centre in Kabul, a large number of students took to the streets of the city on Saturday. Some of them were said to be the survivors of the deadly blast.

Condemning the ghastly attack at the Kaaj Educational Center that resulted in 60 deaths and injuries to several others, some of the explosion attack survivors reportedly took part in the protests, Khaama Press reported.

As per local media, the student protestors were also repressed by the Taliban and the terror outfit reportedly used shafts as well as electric duty gears to disperse the students and beat the protestors.

The protests went on from the Pol-e-Sokhta area of Kabul to the Mohammad Ali Jinnah hospital, according to Khaama Press.

Meanwhile, numerous Kabul women from Afghanistan's minority Hazara community on Saturday protested in the country's capital against the terror attack at the Kaaj Educational Center. The women protestors dressed in black chanted slogans against the genocide of minorities and demanded their rights.

Friday's blast follows many recent attacks against civilians and civilian infrastructure across Afghanistan, including in religious minority communities.

Families of victims and local residents raised security concerns and called on the Taliban to ensure the safety of the public and punish those responsible after the ghastly attack at an education centre in Kabul left 60 persons dead.

UNICEF said this "heinous act" claimed the lives of dozens of adolescent girls and boys and severely injured many more.

India condemned the terror attack on Saturday. External Affairs Ministry spokesperson Arindam Bagchi said, "We are saddened by yesterday's terror attack at the Kaaj Educational Center in Dasht-e-Barchi, Kabul and extend our condolences to the families of the victims. Indian strongly condemns the continued targeting of innocent students at educational places.

He expressed his condolences to the families of the victims and wishes a speedy recovery to those injured.

"Education is a fundamental right and an essential driver for sustainable peace and development," he said.

The UN Security Council (UNSC), while condemning the terrorist attack, reaffirmed that terrorism in all its forms and manifestations constitutes one of the most serious threats to international peace and security. (ANI)