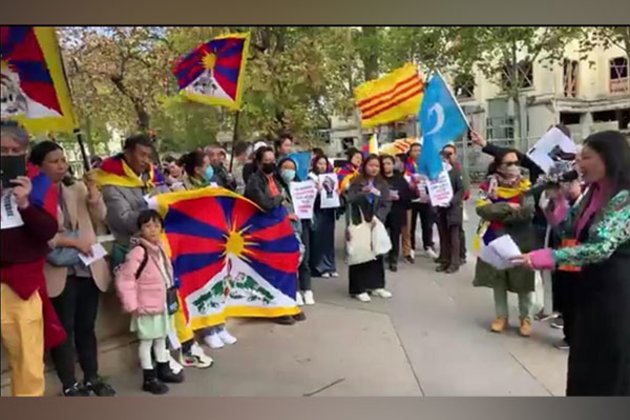 At a large demonstration near the Chinese Embassy, more than 100 persons from organisations like Students for Free Tibet (SFT), Committee for Liberation of Hong Kong, Association of Uyghurs in France, as well as Mongolian, Taiwanese and Vietnamese groups joined this protest.

Marking the day as the Global Day of Action, the protesters, carrying placards with slogans against China, demanded China end the Uyghur genocide and other violations against the people of Tibet, Hong Kong and Taiwan etc.

They also called on the global community to unite to prevent China from committing these crimes against humanity.

October 1st is generally celebrated as China's National Day; a day filled with a widespread celebration around the country based on the ideological preaching of Mao Zedong. Historically, on the 1st of October in 1949, China's newly declared Premier, Mao Zedong hoisted the Chinese flag on Tiananmen Square and announced the birth of a new communist nation, The People's Republic of China.

Soon after the declaration of China as a communist regime, on 2nd October 1949, the new government passed the resolution on the National day leading to October 1st of each year being celebrated as the country's National Day.

Around the globe, Tiananmen Square, however, is not remembered for its celebratory statues and festivities of 1st October, but is somewhat synonymous with its horrendous massacre in China's independent history.

The brutal massacre of protesters indeed does not require any recounting, yet at the same time, it is an important reminder of what the Chinese Communist Party has come to be in these modern times. A totalitarian government riding on the repression of its own citizens and a hawkish nature with the world is what summarises the projection of China in front of the rest of the world. (ANI)